About The Metropolitan Opera

In the fall of 1883, The Metropolitan Opera gave its first performances in New York. It has been one of the most important opera houses in the world since its inception. The company's original auditorium, on Broadway between 39th and 40th Streets, was demolished in 1967 to make way for an office tower. The company's new building, by far the largest theatre in the complex of theatres known as Lincoln Center for the Performing Arts, opened in the fall of 1966. The 2018-2019 season opened  September 24 and runs through May 11. No other opera company in the Western Hemisphere offers so many performances per season as does The Metropolitan Opera. The policy of the company is to sing its repertoire in a work's original language. During this season, operas will be performed in Czech, French, German, Italian and, in the case of Mozart's The Magic Flute, in an English language translation from the original German. The neophyte opera-goer should not be wary of attending for fear of not understanding what is being sung. At every seat, a small screen is provided that translates the libretto into the seat holder's choice of English, Spanish or German.

The Metropolitan Opera offers student rush tickets to many of its performances. This links takes you to a Web page that tells you everything you need to know to take advantage of the company's student tickets policy: https://www.metopera.org/season/tickets/student-tickets/

You do not have to go to Lincoln Center to hear The Metropolitan Opera perform, although there is no substitution for being in the same space with the singers, chorus (if there is one) and orchestra when music is made. The impact of operatic sound on the human body can be as invigorating as the music itself, which stirs one emotionally. Various means of hearing Met performances at home or on the go are explained here: http://www.metopera.org/Season/Radio/

If you have never been to The Metropolitan Opera or have never attended a performance of opera anywhere, you may find the prospect intimidating and believe the art form is the preserve of the rich. It is true that many people of means attend and support The Metropolitan Opera, but a significant percentage of its audiences are working people who are passionate about the art form. This link will give you a sense of what to expect, how to dress and how to conduct yourself (but not the music--the conductor on the podium is there to do that!) when attending a performance: http://www.metopera.org/Visit/what-to-expect/

About The New York Philharmonic

The New York Philharmonic is one of the most esteemed symphony orchestras in the United States. Having been founded in 1842, it is certainly the oldest. The music to be heard during the 2018-2019 at The Phil's home theatre, David Geffen Hall at Lincoln Center, encompasses repertoire dating from the 18th century to world premieres of contemporary pieces never played before in public. Although  occasional programs feature vocalists (such as Handel's oratorio, The Messiah), a typical concert is devoted to music that is purely instrumental. When soloists are featured, these tend to be instrumentalists. Musical pieces that highlight such instruments as the piano and the violin are particularly popular and frequently programmed.

The calendar of upcoming concerts is found here: https://nyphil.org/concerts-tickets/explore/1819/season-highlights​ Once on that page, click the word Calendar in the upper left hand corner. A press release detailing concerts to be given in 2019-2020 can be read here: https://nyphil.org/~/media/pdfs/newsroom/1920/season-at-a-glance/chron-final.pdf

Information on attending concerts of The New York Philharmonic (how to dress, how to prepare, etc.) is found here: http://nyphil.org/plan-your-visit/how-to-prepare

A selection of concerts performed by The Phil are available to be streamed online; some are video and audio, others audio only: http://nyphil.org/watch-listen

Should you be doing research on the history of this organization, or looking for music scores, The Phil's archives are an invaluable resource. Of especial interest to scholars is that many scores that have been digitized feature the interpretative markings of celebrated conductors: http://archives.nyphil.org/ 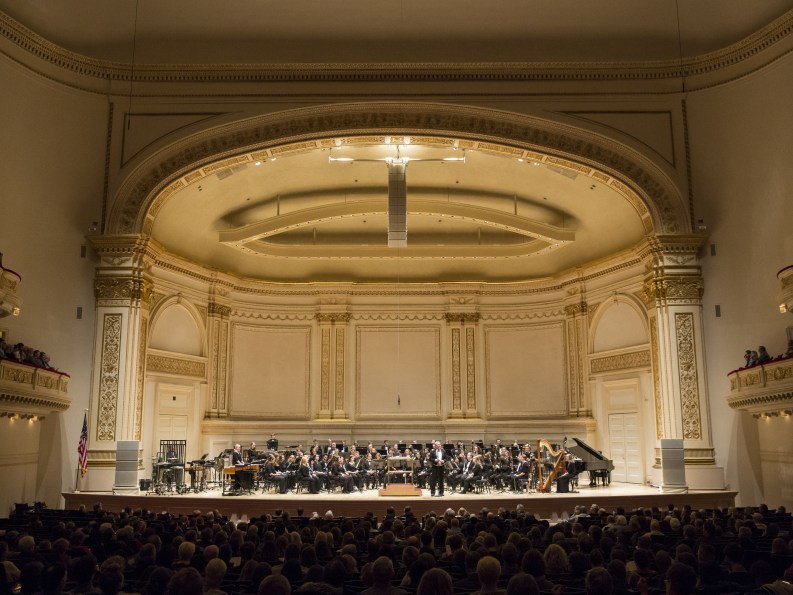 Carnegie Hall is one of the most illustrious concert halls in the world, renowned for superb acoustics. Although its principal auditorium is by no means a small space (it seats 2,800 people), its harmonious proportions create an illusion of intimacy between the audience and the performers on stage. This largest of the Hall's three auditoria is known as The Isaac Stern Auditorium / Ronald O. Perelman Stage. (Stern was a celebrated violinist whose fame helped the campaign to save Carnegie Hall from demolition in the 1950s. Perelman is a businessman who contributed millions to the Hall's recent major renovations.) The subterranean Zankel Hall seats 599 people and is named for the philanthropists who made the creation of this smaller hall possible. The Joan and Sanford I. Weill Recital Hall seats 268 people and is likewise named for the donors who potentiated its restoration. Also in Carnegie Hall is The Rose Museum, a trove of Carnegie Hall memorabilia open to the public seven days a week from 11am to 4.30pm. (It is typically closed from July 1 to October 1.)

The inspiration for Carnegie Hall's construction resulted from a meeting between Andrew Carnegie, a fabulously rich industrialist, and Walter Damrosch, a young conductor and leader of the Symphony Society of New York for which he wanted a more suitable home. With the influential Carnegie behind the project, the Hall became a reality in little more than four years. Its opening concert featured, as a guest conductor, no less than the great Russian composer, Tchaikovsky. Since that first evening of May 5, 1891, most of the world's musical luminaries have performed on the Hall's fabled stages. It is not only classical music that is given at Carnegie Hall;often, jazz, folk, pop and world music artists also concertize there.

Concerts to be given during the 2019-20 season can be read about here: https://www.carnegiehall.org/Events/Carnegie-Hall-Presents-2019-2020 Click an artist's or organization's name to go to a page that details the program. The calendar for the remainder of this season can be consulted here: https://www.carnegiehall.org/Events#calendar

This link takes you to a page that explains how to acquire student tickets for $10: https://www.carnegiehall.org/Student

Carnegie Hall is at the corner of 57th Street and 7th Avenue, easily accessible by the E, F, N and R trains. The link that follows informs the concert goer of everything necessary to know about getting to and enjoying the experience of attending a performance at Carnegie Hall: https://www.carnegiehall.org/Information/Visitor-Information/ 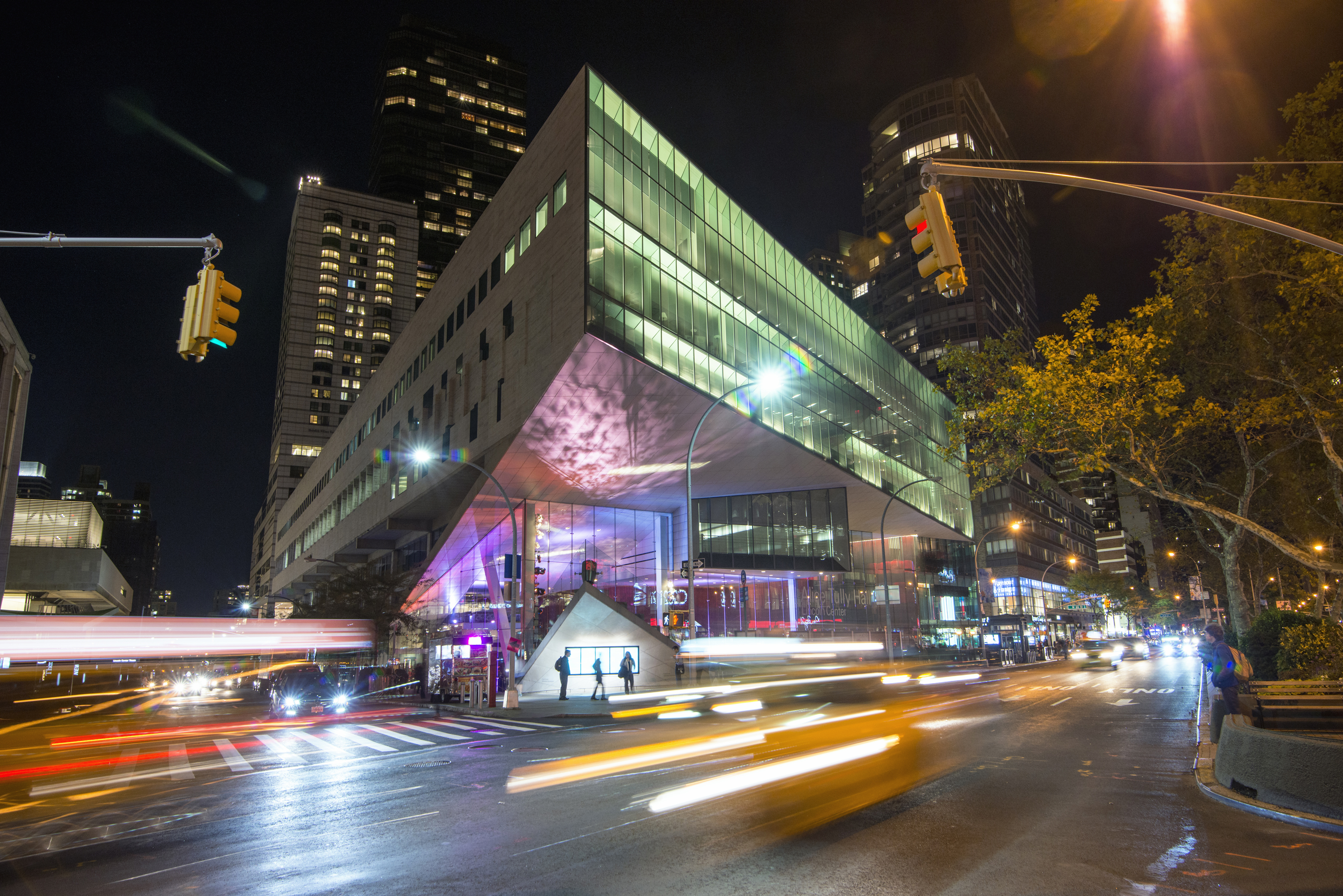 Alice Bigelow Tully was born in 1902 and trained to be an opera singer, although it is as a patron of New York's classical musical life that she is primarily remembered. Over the course of her long life (she died in 1993), she donated many millions of dollars in support of arts institutions and artists. Seating under 1,100 persons, Alice Tully Hall is an ideal size for chamber music concerts and for recitals, which are far more intimate in scale than performances of opera or symphonic music. The Chamber Music Society of Lincoln Center performs at Tully regularly; the calibre of the Society's performances are never less than stellar. (You can check out the Society's performance schedule at this link: https://www.chambermusicsociety.org/nyc/events/.) Recitals of vocal music, for example, are typically best experienced in small venues, since at the time of the creation of the bulk of the song repertoire in the 18th and 19th centuries, it was common for the songs to be sung in private homes for audiences of invited guests. Ideally, a member of the audience of a Liederabend (German for "evening of songs") should feel that the singer is singing directly to him. Not only is the acoustic of Tully Hall warm and flattering to performers, attending a performance there is a particular pleasure for audiences because of the width of the spaces between rows and the size of the seats. Alice Tully was adamant that people should hear music in comfort. Anyone who has ever attended a show on Broadway knows that the experience is akin to being crammed into the economy seats of most airlines! At Tully Hall, one can forget about the body and concentrate on the music, which was Alice Tully's inspired idea. Some upcoming performances are described here: http://www.lincolncenter.org/great-performers/calendar?&venue=Alice%20Tully%20Hall