KHC Exhibition: The Concentration Camps: Inside the Nazi System of Incarceration and Genocide: Introduction

Introduction to the Exhibit 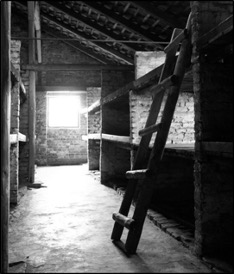 This new, original exhibition at the Harriet & Kenneth Kupferberg Holocaust Center surveys the scope and brutality of the Nazi system of incarceration and genocide, underscoring the horrific consequences of intolerance, racism, and authoritarianism. Approximately 44,000 concentration camps and ghettos existed across Nazi-occupied Europe and North Africa during World War II. These incarceration sites, which Adolf Hitler used as a mechanism to terrorize and eliminate non-Aryan groups (those seen as “subhuman,” “useless eaters,” and not part of the pure, white, Germanic race), ranged from small barns to compounds with populations of a medium-sized city. These extensive networks of ghettos, transit camps, women’s camps, forced labor camps, and extermination camps, to name a few, played a central role in the Holocaust—the annihilation of six million Jews—as well as the mass murder of millions more Poles, Roma and Sinti, homosexuals, people with disabilities, social outcasts, Jehovah’s Witnesses, as well as other political and religious opponents. In addition to the exhibit’s text, images, and artifacts, personal testimonies from local Holocaust survivors offer painful insights into these excruciating landscapes of degradation and dehumanization.

Visit the exhibit at the Kupferberg Holocaust Center, Click Here.